Where to Find Us:

Check Out the Details on This Year's Big Buck Contest!

Owner Brian Holthus trained at Matuska's Northwest Iowa School of Taxidermy, a nine week course on gameheads, fish, birds,and small mammals. Tom Matuska and his staff have won several national awards in taxidermy.  Since beginning his career in taxidermy, he has also mentored with Clark Hays of Mt. Pleasant. He has learned to use his artistic abilities and attention to detail that he developed during over twenty years of specialty auto body and welding on his new love of taxidermy.

He trained with Brett Wingfield in 2011, completed Joe Meador's advance taxidermy course in February 2014, and trained with Kent Reedy in July,2014.

Brian is a member of the Iowa Taxidermy Association, and has won awards at the state level of taxidermy competion.

Holthus is a full-time taxidermist, able to devote his complete attention on his customer's mounts, using the latest techniques and procedures allowing him to create the most professional and realistic mounts possible. 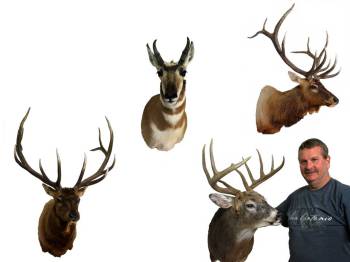